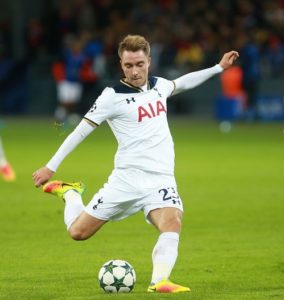 Nobody expected during the opening days of the Euros that a professional footballer, who by most people’s standards, is literally the picture of health, would collapse on the pitch shortly before halftime. However, when Eriksen, who began his senior career in football over a decade ago, lost consciousness during a throw-in at the 42nd minute, it would be the moments after that really mattered.

Doctors have now confirmed that Eriksen suffered a cardiac arrest. Different from a heart attack, a cardiac arrest is when the heart stops pumping blood due to an electrical malfunction that causes an irregular heartbeat, also known as arrhythmia. A heart attack involves one of the main arteries of the heart becoming blocked, essentially stopping bloody supply to the muscle and it becomes pretty logical from there – no blood, the heart can’t pump and is robbed of oxygen.  You can see how these two get mixed up, with a heart attack often inducing cardiac arrest.

Between Eriksen’s collapse and his resuscitation are crucial minutes that determine brain function and ultimately whether the patient is revived successfully. We can all agree, from Simon Kjaer placing the player in the recovery position to the paramedics using the defibrillator, each person on the pitch contributed to Erikson’s survival.

Below we take a look at the history surrounding CPR and defibrillators and share some resources that could save the life of someone you know, love, or think is really good at football.

CPR stands for cardiopulmonary resuscitation. While the process has morphed through many forms during the 1900s, it is William Kouwenhoven who became the founder of modern CPR in 1968. After the technique was developed its creators realised they needed a way to train others and they wanted something lifelike but naturally, actual humans were out of the question!

The death and birth of Resuscitation Annie

They approached a Norwegian toy manufacturer called Asmund Laerdal, who specialised in making children’s toys and dolls from soft plastics. At some point in the process, the team decided that the mannequin should be female, it was thought that trainees might find this less threatening.

The face he chose was of a real woman who had died in the 1880s in Paris. She was found in the River Seine and probably died by suicide. The woman was never identified, her body was placed on display in the Paris Morgue. The story goes that a mortician was fascinated by her beauty and the sort of half-smile which was upon her face. He ordered a plaster cast of her face to preserve her beauty. After he was buried the mask continued to be displayed in an attempt to identify her. 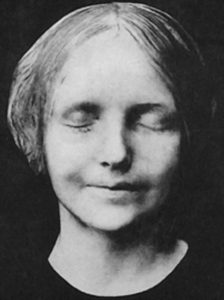 L’Inconnue de la Seine, the woman who drowned in the River Seine

It is said that one of the many reproductions of her face made its way to Laerdal’s grandparents’ house and led to Laerdel choosing the woman as his model. She became known as Resusci Anne (or Resuscitation Annie and variants on that theme.) Since then, millions of people across the world have seen her face and practiced CPR on her likeness. This is a sad and grim story but nevertheless, the unknown woman from the Seine saves lives year on year. 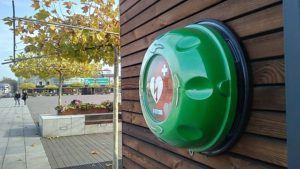 Defibrillators were first demonstrated in 1899 by Jean-Louis Prévost and Frédéric Batelli, the two had discovered that small electrical shocks could induce ventricular fibrillation (irregular heartbeat) in dogs, with larger charges bringing the heartbeat back to regular function.

Car batteries for the current…

We have to fast forward a few years to the 1960s to see anything remotely similar to the AED used to shock Eriksen’s heart on the pitch. In 1965, with the help of John Geddes, and technician Alfred Mawhinney, Frank Pantridge invented the world’s first portable defibrillator, using car batteries for the current. It was installed in an ambulance and was first used in January 1966. That first model weighed 70 kilos; the modern devices weigh just 3kg. 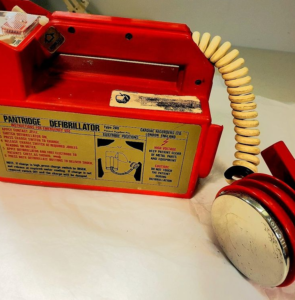 Now AEDs are commonplace and can be found in shops, workplaces and sports stadiums – they save millions of lives every year.

How can I learn CPR?

At Thackray, our visitor experience team are all first aid trained, including in CPR. It’s a life-saving skill to learn and lots of organisations can help you learn. If you’d like to learn CPR look out for first aid training through your workplace, clubs, organisations or through providers like the British Heart Foundation, St Johns Ambulance, or the Red Cross.

For more resources, you can go to: