Walking the halls of the newly refurbished Thackray museum felt contradictory, the place had been transformed since I had last visited on a school trip, over ten years ago as an awkward pre-adolescent. Now, here I was an adult (sort of) about to finish my master’s degree and working here on a placement as a Comms Assistant. Thackray was looking slick, artfully curated, and ready for launch, yet as I trotted along the cobbled path of disease street taking in the smells, sounds, and Hannah Dyson’s tragic tale, I was suddenly 13 years old again.

Three days into my new job, here I was at the grand relaunch of the Thackray Museum of Medicine. With the museum’s transformation into a vaccine hub, the creation of 11 immersive and tactile new galleries, and now the shortlisting for Art Fund Museum of the Year award 2021, Thackray had a lot to be shouting about. 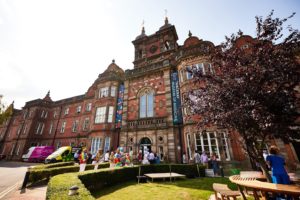 With a relaunch of this calibre, naturally there is a big celebration filled with very important people. After a year of virtual learning, remote working, and digital experiences I was well and truly diving in at the deep end. A flurry of VIPs arrived at once, and if I hadn’t felt out of my depth at the start of the event, I certainly did as I found myself giving a tour of the museum to Caroline Dinenage, the Minister of State for Digital, Culture, Media and Sport, Neil Mendoza and their impressive team.

As we sauntered through disease street and into the 19th century operating theatre, I skim read labels and dusted off some dormant knowledge from my GCSE history’s ‘medicine through time’ module, giving the illusion of self-assurance. Out of the historical and into the new Unfurlings community co-curated exhibition – comprised of 16 beautiful banners as part of a wider UK project campaigning for a better understanding and representation of people living with dementia. It was here that CEO, Nat ushered them for a profoundly informed discussion and a medicinal aide, before whisking them off for the tour of the rest of the newly refurbed galleries.

I manoeuvred my way outside, filming the band – Mr Wilson’s Second Liners – for social media. A band bursting with zest and exuding a psychedelic vibe everyone could get behind as they fused the pageantry of New Orleans brass bands with 90s rave music and club classics – an undoubtedly winning blend. Once satisfied with my recordings, I had my eyes on the prize I moved towards the main event, scran.

The drinks and canapes masterminded by award-winning chef Chris Hale, were delicious with a whimsical medicinal twist. Looking around all the food and drink on offer seemed to scream ‘Eat Me!’, ‘Drink Me!’. Ultimately, it only seemed right to start off with a cheeky medicinal aide: a strawberry lemonade concoction with an (optional) test tube of vodka to pour in. Calpol all grown up. The canapes were floating around handled by servers dressed in scrubs; a tomato and chilli syringe to inject into a pulled beef croquette. Whipped goats’ cheese, walnut, peach, and honey served in a petri dish and last but by no means least a matcha, ginger and lychee biscuit served in a pill box. 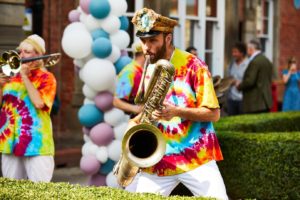 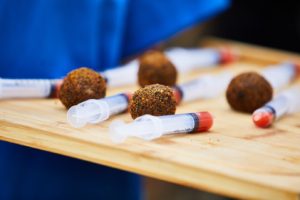 Don’t mind if I do 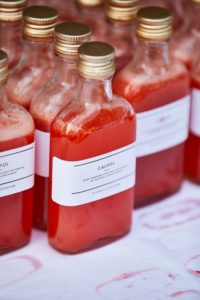 After obligatory mingling and schmoozing, it’s time for the actual main event. With eager eyes and, by the end of live streaming it, aching arms, I watched as an array of impressive speakers took the stage including Caroline Dinenage, Art Council’s Pete Massey, Chairman of Thackray’s Board Neil Kaiper-Holmes, and epidemiologist Adam Kucharski (to name drop a few). The speeches were succinct yet touching as they celebrated the refurb and relaunch of Thackray Museum of Medicine and its nomination for Art Fund Museum of the Year 2021. 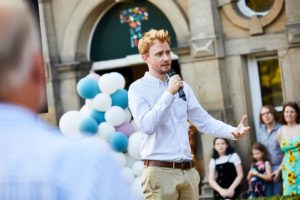 The man, the myth, the epidemiologist Adam Kucharski

The speeches ended and as if by magic, Mr Wilson’s Second Liners reappeared for their second act. As the event started to wind down and people started to bid Thackray farewell, I sighed a sigh of relief that the only thing that had gone bottoms up were the glasses of Pimms. Everything had actually gone well, all in all, it was a pretty wild first week.

For anyone else in the awkward transitionary stage between graduate and professional, this is my key takeaway from diving in at the deep end: