The More Than Oliver Twist project (2019-2021) was a nationwide research project lead by the Subject Specialist Network, The Workhouse Network, which aimed to provide a long-term context to the lives of workhouse inmates listed on the 1881 census. The project involved six workhouse sites, including Leeds Union Workhouse (now Thackray Museum of Medicine).

Below is the story of Mary Peddlestone, an Irish woman who found herself living in Leeds Union Workhouse on census night 1881 at the age of 86, researched and written by Carolyn Huston (Workhouse Network Research Volunteer).

Mary Ann McCan led an unusual life. She was born in County Mayo, Ireland. In 1831 she married a Grenadier Guard, John Piddlesden in All Souls Church, Marylebone, London. The couple probably could not live together as John would have had to live in barracks. They had only one child, a daughter, also called Mary Ann, in 1834.

John was in the army for 28 years and served abroad twice in Canada and Portugal. His wife and daughter also travelled to Quebec to live near him. Aged 57, John retired in 1850 with a small pension. The couple’s daughter married in London in 1856 and moved to Leeds where her husband set up a mungo manufacturing business. Her parents followed her. John Piddlesden died in 1873. His pension stopped, leaving Mary in poverty in her old age. She lived in the Leeds Union Workhouse, dying in the Union Infirmary in 1886. 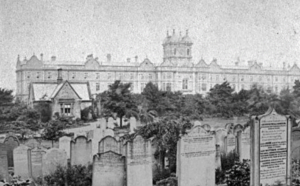 Carolyn began researching her family history in 2006 after she retired. She reviewed her father’s written notes on his family tree and then started lessons, learnt lots of new skills, and has continued as an amateur family historian since then.

Thackray (TH): In the biography, you stated that Mary was originally from Ireland – how did that affect your research?

Carolyn Huston (CH): I find the Irish records very difficult and because Mary was born in 1785, I thought it would be highly unlikely for me to find any records for her. This became even more apparent when I discovered that her maiden name was “McCann” which is a very common surname in Ireland. I basically found nothing for her in England until her marriage.

TH: So, would you say her life was a mystery until she was married?

CH: Yes, I would say so. We know when she was born and when she was married, and the in-between years are a mystery. We even know where she lived in Ireland [County Mayo] as it was there on a census. She was in London in 1831 when she got married so she must have come across to England before the great migration with the potato famine, which was unusual. I have no idea why she was there. She may have met her future husband while he was a soldier stationed in Ireland which was part of Britain at that time, and then travelled over with him to be married in England, but we just don’t know.

TH: So, finding information about a woman from Ireland is surprising enough for the time, but was there anything else in her story which surprised you while you were researching her?

CH: I think the surprising thing was how much information there was about her husband. Because of that, I could then follow her story. The reason there was so much about her husband was because he was a Chelsea Pensioner. During any research, if you find someone who says they are a “pensioner”, they are almost always a Chelsea Pensioner as very few occupations provided a pension in the 1800s. Luckily the Chelsea Pensioner records are online, and they contain a huge summary of where that particular soldier had been and when, what his regimental number was, where he had joined the army; whether he had been promoted or disciplined, and also information about the size of his pension, why he received it, and the date of his death.

TH: It sounds like those records were incredibly useful to you.

CH: They were very useful documents for me. They have a huge amount of information about the soldiers including what they looked like. In comparison, if you look at the World War One records, or the Boer War records there is much less information as they were held in the National Archives where many were destroyed in the 1973 fire.

TH: Do you think that one of the reasons why women, especially poor women, are harder to research as they would not usually be in professions where detailed records, such as military records, were kept?

CH: Yes. Women’s records are always dependant on researching husbands if they are married, which is true with general research. Women didn’t have a great deal of power or independence when they got married. Some of them did, and other inmates I have researched did carry on working and had occupations along with their husbands, but usually they were at home. You have to follow the husband and the children to find what happened to the woman.

TH: It is sad that in the case of women who didn’t get married and didn’t have children, they are in danger of disappearing.

CH: True, but if they are unmarried, you can usually find them on census records and can find out what jobs they are doing. I have had other inmates from the workhouse who I have been able to follow on census records, and later if you go over into the 1900s you start to see them appearing on voter’s rolls. So, I think [women] disappear more if they are married. Whereas if they are unmarried, they are working in their own right; you can track them by their occupation like you can with men, and their surname never changes. With married women, unless you can find the men, you don’t really know what they have done.

TH: Are there any other people you have researched who have similar stories to Mary?

CH: I have researched one other inmate who was married to a Chelsea Pensioner. She married him later in life like Mary, and again there was a lot of information about him.

The unusual thing in Mary’s story was the detail about going to Canada. Mary was following her husband with their daughter in tow. He wasn’t on the 1841 British census because he was living abroad at the time, and actually appeared on the 1841 Army Substitute census, in Canada. I have no idea where she was living or if there was accommodation for her. Officers in the army were allowed to have accommodation for their wives but the other ranks were not encouraged to marry. It was quite a journey she took to a strange and foreign land but then she would have had practice with that when traveling from Ireland. It is clear Mary set down quite strong roots in Canada as her daughter went back to live there after her own husband died, and then Mary’s grandson also became a bandsman in the Canadian army.

TH: You have spoken of this before, but what was the trickiest aspect of the research?

CH: Finding anything about her before 1831 when she got married. Once I cracked the Chelsea Pensioner records it was easy. I just had to follow a hunch that if the word pensioner was there then he was a Chelsea pensioner.

TH: Finally, what was your favourite part of researching Mary Peddlestone?

CH: I was very touched by the fact that [Mary and her husband] had followed their daughter up to Leeds. Their son-in-law then offered her husband work to top up his pension. In 1871, Mary was living in Hunslet with one of her young granddaughters. Even though they had no extended family, they were very supportive of each other. It must have been awful for her when her son-in-law died, her husband died, and her pension stopped. That I am sure is the reason why she ended up in the workhouse.

You can discover more about the history of the Leeds Union Workhouse, the lives of the inmates, and the staff who took care of them, in our new display at the Thackray Museum. You can also explore the More Than Oliver Twist Google Arts & Culture exhibition and the online archive of Leeds Union Workhouse inmate biographies on Ehive to discover more about the other workhouse lives.

Also, join us for free to explore the history of our building and the lives of the people who lived in it, at our Heritage Open Day on 10th September 2021. 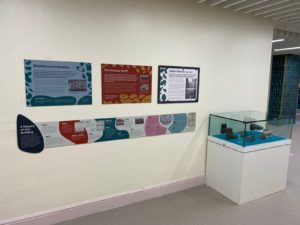