A tray from a cabinet of materia medica, 1860-1880, featuring the roots and bark of various plants

The Thackray Museum holds a lot more than scalpels, syringes and saws. The art installation currently on show in our temporary exhibition space, ‘Regarding Forests’ by Chrystel Lebas, provides an immersive experience of the healing power of trees and plants. Green spaces can be a balm for the mind and soul, but they are also an abundant source of natural medicines which have been used since time immemorial to treat a huge range of physical ailments, from heart failure to altitude sickness.

In many cases, it is debated whether these plants have the full range of medicinal properties they are credited with, as not all of their healing powers have been thoroughly tested by science. However, many of them still provide key ingredients for modern medical treatments and continue to be used in their traditional forms in societies and cultures around the world. In this blog, we’ll explore some of the medicinal plants held in the museum’s collection and reveal how we care for these delicate and unusual objects.

The most common type of medicinal plant in our collection is those with purgative effect, designed to counteract constipation and flush out the digestive system. The most striking of these is a long seed pod from the cassia fistula tree, commonly known as Indian laburnum or golden shower. Native to the Indian subcontinent, the tree is highly valued in Ayurvedic medicine, where it’s known as Aragvadha, ‘disease killer’. The leaves, flowers, roots and pods are used as laxatives, while poultices and extracts of the leaves and bark can be used to treat skin complaints like eczema, ringworm and boils. The pods are sometimes even burnt and their ash mixed with salt and honey to treat a cough. 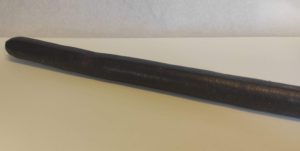 A 57cm-long pod from the cassia fistula tree

One of the more controversial herbal remedies is the coca leaf, long used in the Andean regions of South America for its beneficial properties. Chewing the leaves or brewing them into tea can suppress hunger and provide a long-lasting energy boost, enabling workers to toil long days in the mountains, fields and mines. It is also a popular remedy for altitude sickness, countering the accompanying breathlessness, headaches and nausea. As a mild analgesic (painkiller), it has traditionally been used to provide relief from toothache, wounds and mouth sores. As the key source ingredient for cocaine, the potential addictive and psychoactive properties of coca make its use hotly debated and illegal across most of the world. Many studies have indicated that moderate use of the leaf does not cause the same dangerous and addictive effects as the processed drug which can be synthesised from it, although more research will be required for it to gain wider acceptance. 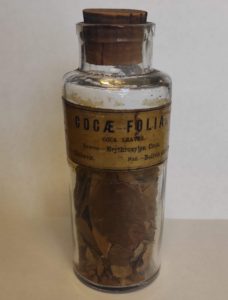 Like most modern medical drugs, many of these plants can have unpleasant side effects or be dangerous if taken incorrectly. Powerful purgatives like poke root or devil’s claw root can cause vomiting, stomach cramps and diarrhoea. From pre-colonial America to medieval Italy, extracts and elements of foxglove have been used to treat heart failure and related swellings, stabilise an irregular heartbeat, dress wounds and soothe burns. First formally documented as a medical treatment by William Withering in 1785, digitalis – the active compound in foxgloves – still forms the key ingredient in heart medications like digoxin and digitoxin. However, the plant is extremely poisonous and can easily cause blurred vision, muscle tremors, heart palpitations and even death, so it should only be used in forms prepared and prescribed by a medical professional. 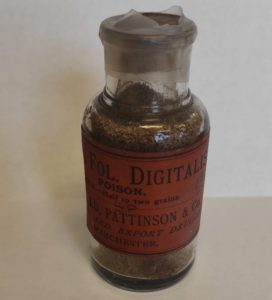 One healing plant with an even more sinister reputation is belladonna. Taking its name from the Italian for ‘beautiful lady’, it’s so called because Renaissance women dripped its juice into their eyes to dilate their pupils, emulating sexual arousal. Also known by the folk name ‘deadly nightshade’ in English, it causes similar effects to foxglove when taken in forms which are not strictly controlled, along with fever, dry skin, painful urination, hallucination and memory loss.

However, the chemicals present in belladonna, including the alkaloids atropine and scopolamine, can be used to heal as well as to poison. In low doses, these are still used to treat gastrointestinal complaints like stomach ulcers and irritable bowel syndrome; slow or irregular heart rate; and motion sickness. In this last context, belladonna is often applied by skin patch, and has even been used by scuba divers to combat seasickness. Belladonna alkaloids were proposed as a treatment for Parkinson’s disease in the 1860s by famed neurologist Jean-Martin Charcot and his student Leopold Ordenstein, and are still sometimes used as an alternative or supplementary treatment, although their effectiveness is debated. Infused into ointments and – from the later 19th century – plasters, belladonna was applied to the skin to provide relief from rheumatism and nerve pains like sciatica, and continues to be sold in these forms today. 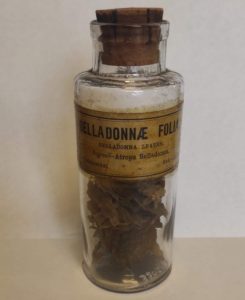 The impact of plants in medicine goes far beyond their fresh or dried leaves, roots and bark. 17th-19th century chests and cabinets of materia medica (ingredients used to make up different medicines and drugs) are invariably stocked with spirits, essences and tinctures derived from a huge range of natural ingredients: ginger, rosemary, buchu leaves, myrrh, sumbul root and many more. You can see one of these beautiful cabinets in our ‘Apothecary Shop’ in the museum.

In the 19th and early 20th centuries, shoppers were inundated with commercial products which claimed a medicinal plant as their key component. One very popular turn of the century example was Cascarets, a ‘Candy Cathartic’ which produced a strong laxative effect. Its headline ingredient was cascara bark, which had long been used by the indigenous inhabitants of the American Pacific Northwest to treat constipation, digestive issues, gall stones and even gonorrhoea. The Thackray collection contains a hilarious advertising token from around 1920 which could be flipped like a coin, with the ‘tails’ or losing side featuring a glum-looking cherub on a potty above the slogan ‘All going out – Nothing coming in’. 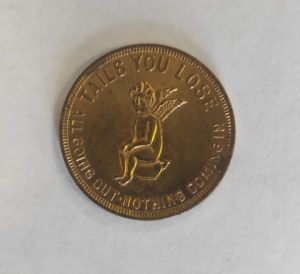 An amusing advertising token for Cascarets, made with cascara bark.

So how do we look after this fragile plant material?

Organic matter poses a particular storage challenge for museums because it’s highly vulnerable to damp, mould and nibbling insects. We get off lightly at the Thackray because the majority of our objects are made from metal or plastic – we don’t have a large collection of taxidermy or costume and textiles. However, this means we have an even stronger obligation to preserve the organic materials we do have, including our books, archive documents, medical uniforms, and plant matter.

For the sake of all our objects, we try to keep the temperatures in our stores between 16 and 20 degrees centigrade, with a relative humidity of 40-60%, although being a repurposed Victorian workhouse building makes this challenging at times! Organic materials like wood and dried plant matter are particularly sensitive to extreme or fluctuating temperatures: they can swell or grow mould in humid conditions, or become brittle, shrink and snap in very dry air. To make sure the leaves, pods or bark shavings don’t roll against each other and break, they are separated by cushions of acid-free tissue paper, packed carefully into archival boxes and secured with extra padding wherever needed to prevent them from sliding around inside. 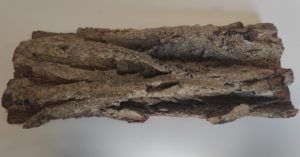 Dried plants may not be targeted by clothes moths or carpet beetles – generally the most dreaded pests in a museum store – but they can be eaten by species like the golden spider beetle or the biscuit beetle. Like most museums, we try to regularly check on our organic materials to make sure no tiny creatures have managed to sneak their way into our stores. If there are any signs of infestation, the affected objects will be frozen for two weeks to kill off any pests and their larvae, and the packaging around the objects will be replaced. As with any other form of controlled drug in our collection, our coca leaves are licensed, kept in a secure safe and regularly audited to make sure nothing is missing.

So is it worth the trouble to maintain boxes of bark shavings, chopped roots and brittle pods whose medical properties are often questioned and occasionally controversial? Absolutely. Our purpose at the Thackray Museum is to tell the story of medicine, and these plants are an integral part of its past, present and future, both in the UK and around the world. Next time you visit the museum, take a closer look at the powdered bark, leaves, roots and plant-based tinctures in our ‘Apothecary Shop’– their influence on modern medicine might be greater than you think. 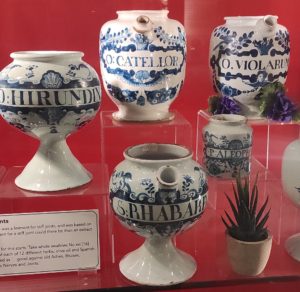 Delftware apothecary jars on display. These were designed to contain plant and animal-derived matter, including oil of violets, syrup of rhubarb and pills of aloe. 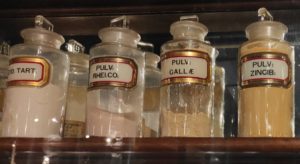