A care robot is just that: any robot designed or used for care. But what does this mean exactly? What is care and how can robots provide it? Care is a slippery term – philosophers have written entire books defining and explaining what care is and should be. Care describes both feelings and behaviours; we care, take care, care for, care about, have, and don’t care. 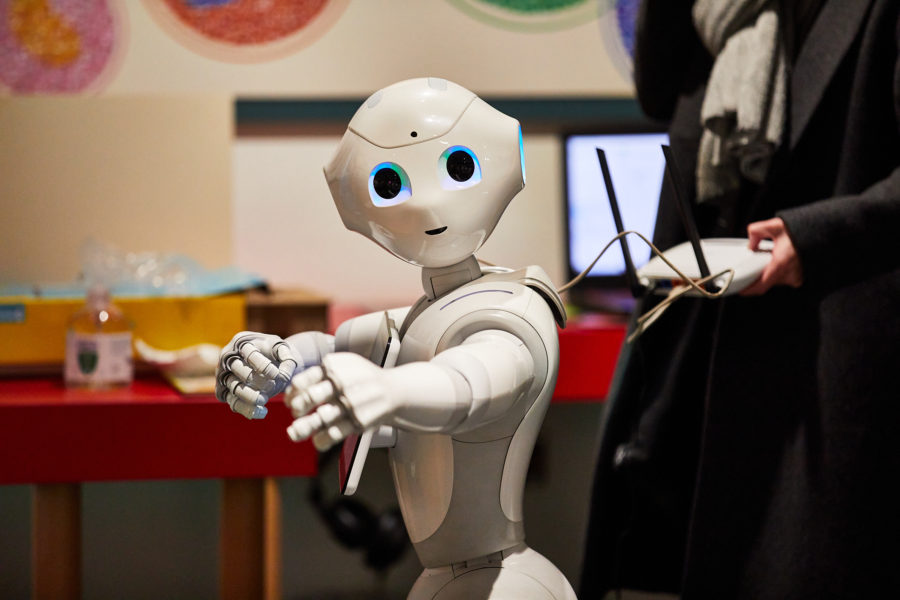 What can robots do?

Robots are capable of care behaviours, such as reminding users to take medication, prompting conversation, or facilitating communication with family, friends, and health care providers. Whilst they are not capable of feeling emotions, robots can act and respond in ways that trigger emotional reactions in those who use them. In this way, care robots are designed to offer emotional support, to provide for those in their care. They may act as a soothing presence for children receiving medical treatments, or a comforting, non-threatening companion for people with dementia.

Care robots are often geared towards children, people with disabilities, and older adults, especially those with cognitive impairments like dementia. Robots like Paro, MiRo, and Huggable are designed to give care by receiving it. They are meant to touch and be touched, talked to, and, sometimes, to talk (or squeak, as the case may be) in response, providing a sense of companionship and intimacy in many ways similar to the care provided by companion animals. Many care robots are actually designed to look and sound like animals in order to reproduce the benefits of animal companionship. This design is beneficial for those who, for reasons of safety, health, institutional restrictions, etc., are unable to live with a pet.

The capacity of care robots to forge emotional connections with their users provokes a sense of optimism in some, but anxiety and concern in others. Especially in a climate of increasing demand for robot care.

Some studies suggest robot care offers health benefits: it can improve mood and immune system response and diminish loneliness and stress in elderly users. Some studies even indicate robot interaction might decrease symptoms of dementia. In addition, robot ethicists have outlined hypothetical benefits for human caregivers, suggesting that robots might diminish the strain of care work for their human counterparts… let the robots do the heavy lifting! 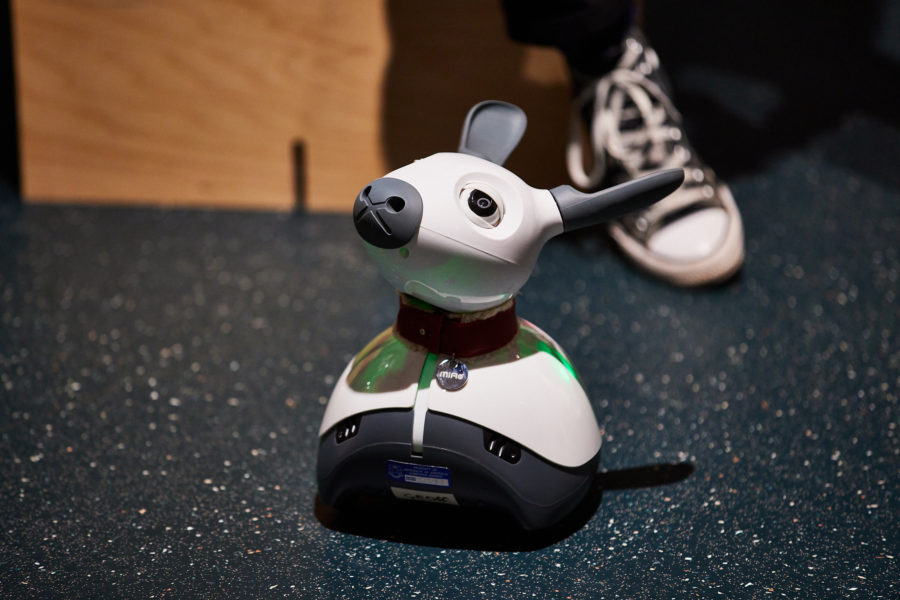 On the other hand, some critics suggest that care robots are deceitful. They are concerned that vulnerable users might be tricked into thinking they are engaging with a living, feeling creature that is truly listening and empathising in ways that robots cannot. Another worry is that robots will cause an increase human isolation. Critics suggest that caregiving robots might be used to replace, rather than assist human caregivers, thereby reducing or even eliminating opportunities for human contact for vulnerable people, particularly older and impaired adults.

Discussions of care robots often veer into fantasies and nightmares based on the images and narratives from robot fictions. By robot fictions, I mean any imaginary robot representation, whether in literature, film, television, comics, or other media. These fictions shape public perceptions of what a robot should and shouldn’t be and what it can or should do. 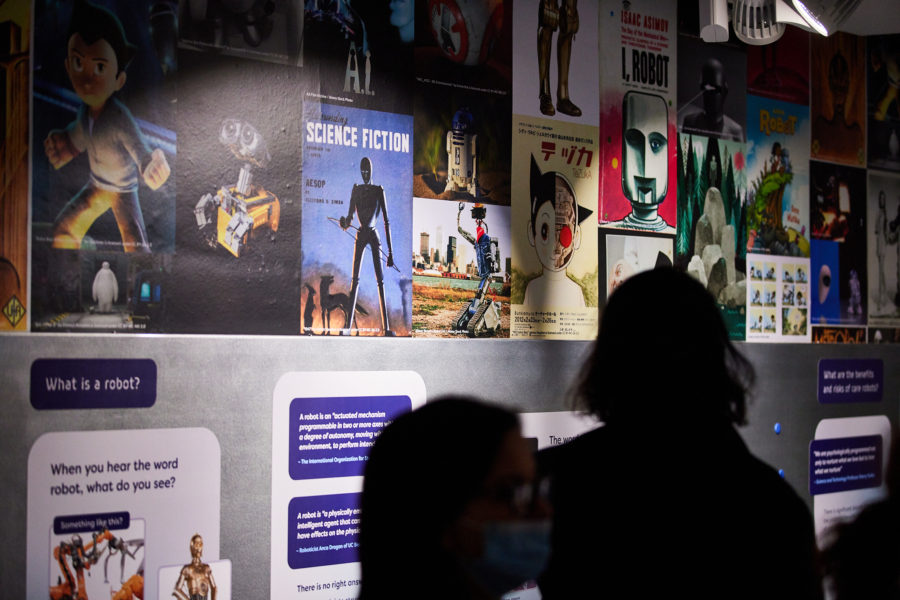 Robot fictions also influence the creation of robots themselves. It’s common for engineers and designers to cite fictional robots, like C3P0, R2D2, Rosie the Robot and Johnny Five, as inspirations for the development of their own robots. 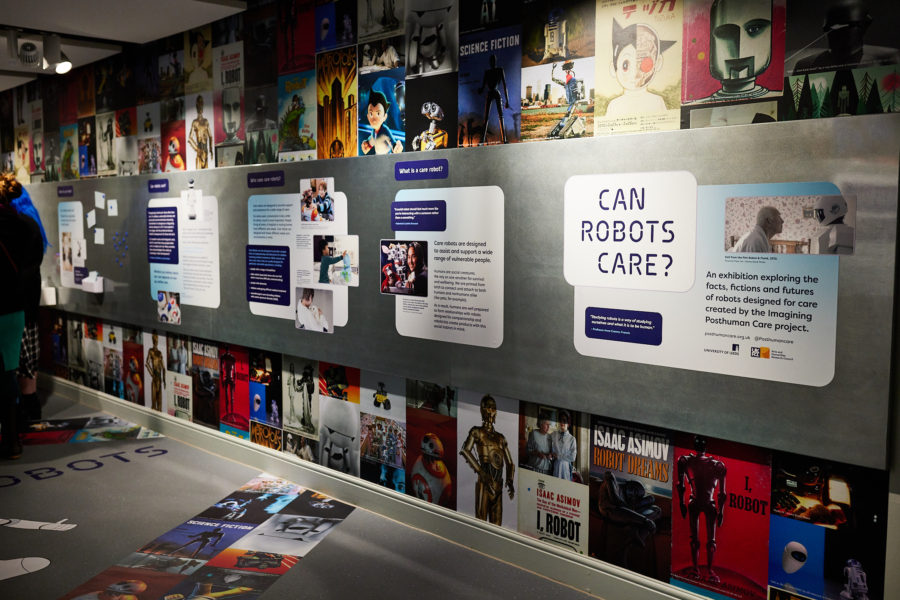 This exhibition poses the question: Can Robots Care? considering what care robots are, where they come from, who makes them and who uses them. Through carefully curated displays, activities and even interactions with robots Paro and MiRo, this exhibition explores the connections between actual and fictional robots. How do our experiences with imaginary robots influence our expectations, hopes and concerns about the possible futures of robot care? Visitors will have the chance to learn all about human relationships with robots, it’s up to you to decide – can robots really care?

You can visit the exhibition until 18th April 2022

To explore more about the Imagining Posthuman Care project, please follow the links below: